Kuwae is an ancient island of Vanuatu (South West Pacific), which was split in two (the actual Epi and Tongoa) after the cataclysmic eruption of its volcano. Today Kuwae is the name of the submarine caldera created by this explosion. It is interesting to note that this eruption occurred in 1452 at a date when the Pacific islands were totally unknown to the rest of the world. However the enormous amount of volcanic debris sent to the atmosphere (3.4 km3 apparently) has engender various climatic perturbations all over the planet: coldness, snow, anomalous mist, heavy rain, thunderstorm, strange red lights and so on. All of them have been correctly observed and reported in various chronicles. But they were incorrectly interpreted as bad presage or mysterious omen, because nobody knew the existence of the Pacific islands, the eruption of Kuwae or the effect of huge amount of ash in the high atmosphere. In particular these atmospheric disturbances appeared in Constantinople during the siege to the city by Mehmed II (april-may 1453). Particularly a moon eclipse fulfilled the ancient prophecy of the city’s disappearance, a very discouraging sign for the Byzantine troops!

I designed Kuwae Shawl with this story in mind. The red and beige colours figure out the magma and the ash of the volcano. The asymmetrical shape, with its long side and small tip, symbolizes the fact that an event occurring in a very remote and unknown part of the world may have considerable and inexplicable consequences all over the planet. Finally the little flower pattern reminds the oyas (the small lace flowers sewn on the edges of Turkish shawls) and the lace edgings remind the latticework screens of Turkey.

Kuwae is an asymmetrical triangular shawl worked from one side to the other in garter stitches. The neck side is worked in I-cord and the long side in lace. Six flower bands, very easy to work (a tuto is added), break the monotony of the garter stitches. 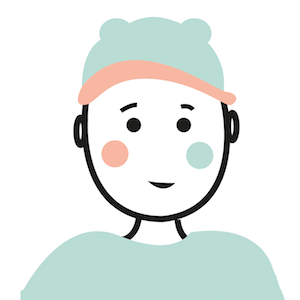