An interview with the creator of the Perfect Pockets Shawl: Sonja 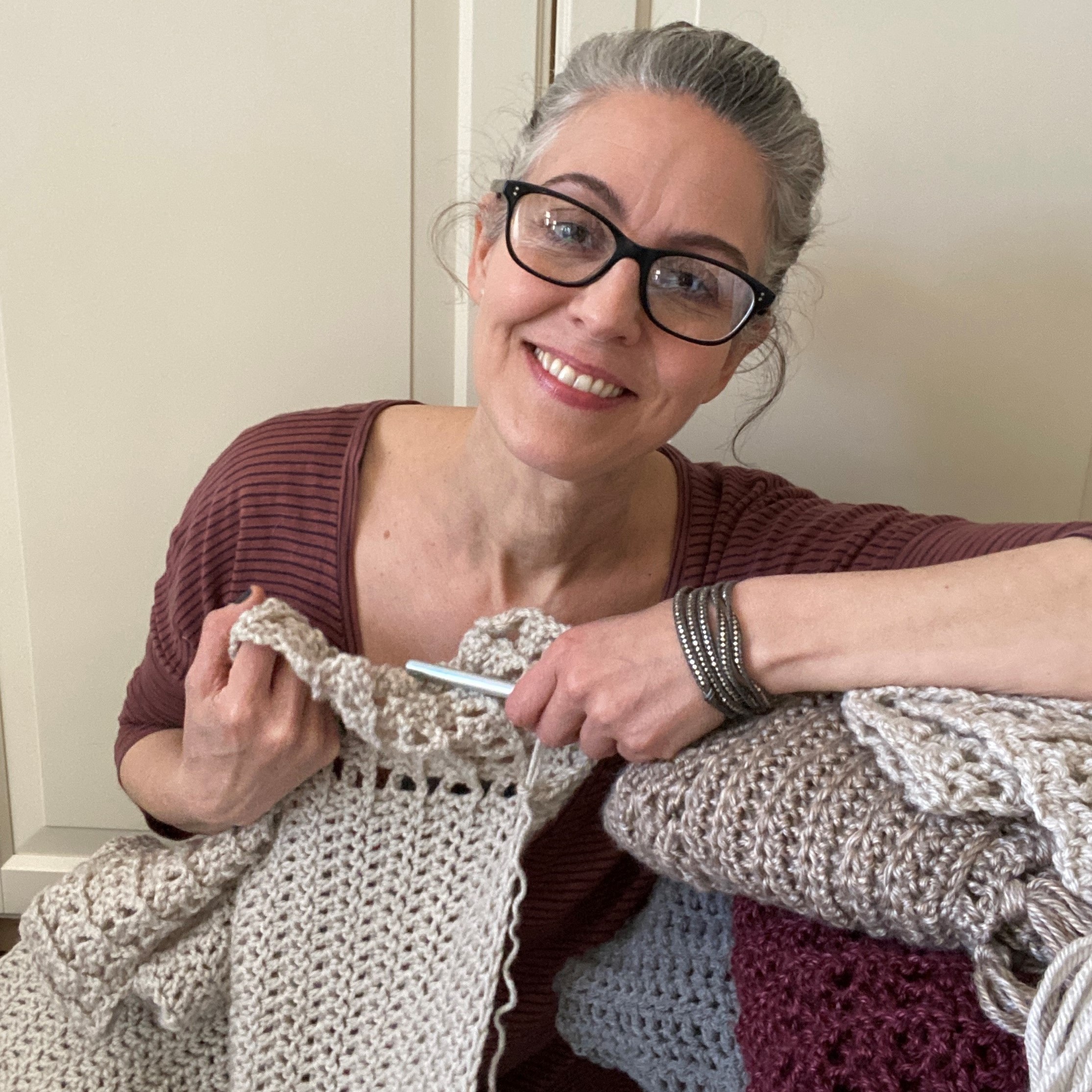 Welcome to our Designer Spotlight Feature, where we introduce our new passionate and creative designers and feature their amazing designs! This week we spoke to Sonja of Knot yourself Out, who creates beautiful Crochet patterns for women and is the creator of the popular Perfect Pockets Shawl. We spoke about her journey as pattern designer, her workspace, and what gets her out of her creative slump.

Can you tell us a bit about your designer brand Knot Yourself Out?

"My brand, Knot Yourself Out, offers patterns for unique crochet accessories that are visually striking and easy to make." 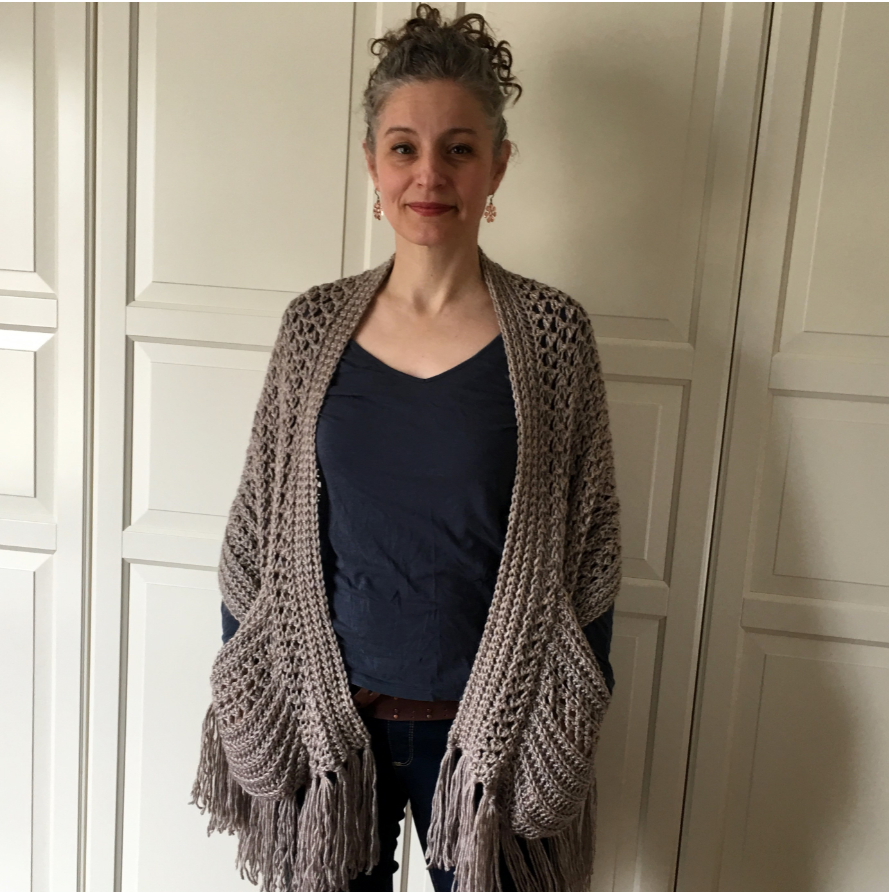 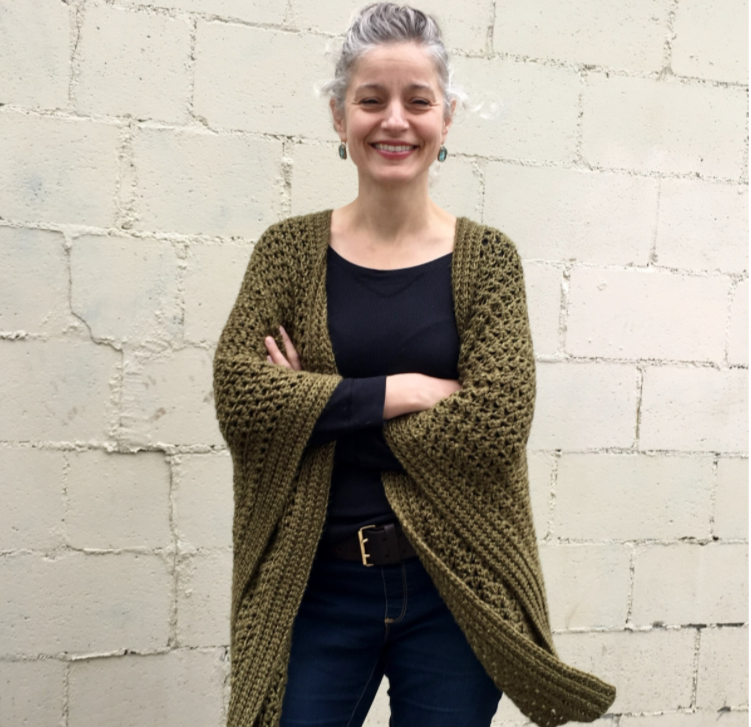 What inspired you to become a pattern designer?

"I first dreamed of designing crochet when I was living in Bulgaria as a U.S. Peace Corps volunteer in the 90’s. It was my first “job” post-college and as much as I enjoyed it, I knew I wanted to do something more creative. I had a crochet sweater pattern book with me from home and every time I looked at it, which was often, I thought, “I want to make and publish designs like those.”

After Bulgaria, I began working in higher education and then I moved into tech and then into tech for higher education. I even went back to school and earned a master’s degree in marketing -- all the while, still longing to have my own creative business; ideally in crochet.

It was the birth of my son, ultimately, that allowed me to realize my dream. While I was home with him, I wrote and published two crochet pattern books: Painted Jute Rugs, Annie’s Attic, 2010 & Elegant Beaded Bags, Leisure Arts, 2013. My work also appeared in Donna Kooler’s Encyclopedia of Crochet, Leisure Arts, 2012 and Crochet! magazine.

When my son began school, I moved into the online space to sell my crochet patterns, and it just took off. It literally took me decades to get here!" 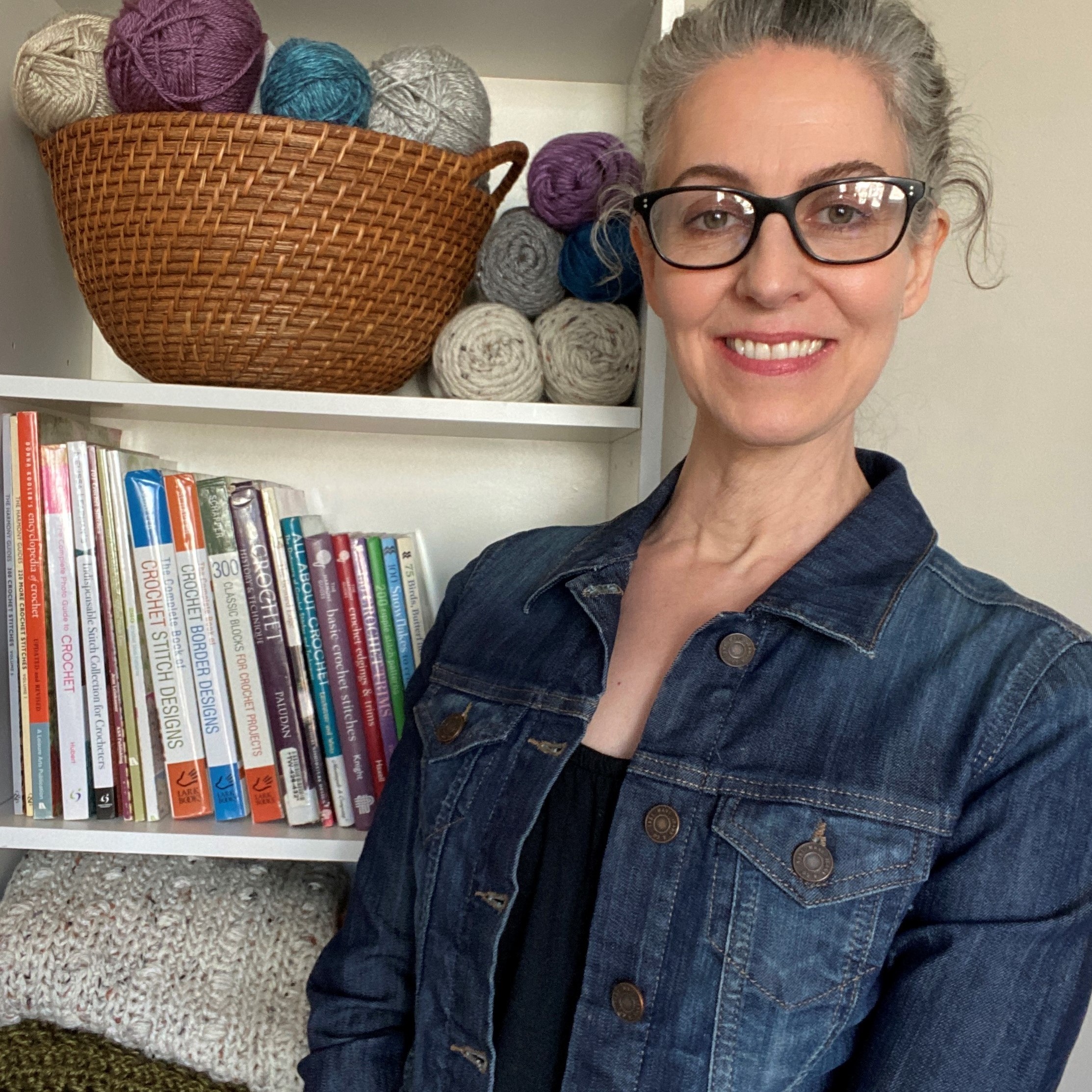 Why is pattern design so important to you?

"My motto, which appears on my patterns and on my social media posts reads:

“Crocheting brings joy, so go ahead and knot yourself out!”

As I mentioned, it took me decades to become a designer. I am so grateful to have finally found my path, that first and foremost, I want to share with others the joy and the satisfaction that comes from making something beautiful and functional. I want others to enjoy the process that I enjoy, as well – one that involves working with color and texture and the soothing meditative rhythm of making knot after knot.

Since I want to encourage as many people as I can to embrace crochet, I work to design pieces that are approachable, and take several things into consideration to achieve this: Is my design striking? Is it easy to make? Is it interesting -- i.e., does it offer a little something different (like a shawl with pockets, a cowl that doubles as a capelet)? Is the material affordable and widely available? Is there minimal fitting and sizing involved?" Do you have your own studio? Tell us about your workspace!

"I work in almost every room in our house. I used to have a room dedicated to my business, but as it turns out, I could not be confined to one space! For photo and video sessions, I pull furniture and plants and other “props” into well-lit corners to work as backdrops -- another way my job allows me to be creative."

"That would be my Perfect Pockets Shawl crochet pattern. It went viral during COVID-19 and has been credited for sparking the pocket shawl crochet trend of 2020. People from all around the world have taken the time to reach out and tell me how much they enjoyed crocheting my Perfect Pockets Shawl. Many made them as gifts -- some for up to 18 family members! Others told me how they made and sold my shawl for much-needed income. One woman crocheted and sold 65 Perfect Pocket Shawls! Others learned how to crochet just to make the shawl, and they were successful, and now they love to crochet! The stories of gratitude have been very humbling. Receiving them is the best part of my job."

Do you consider pattern design a hobby or is this your full time job? Are you lucky enough to be able to concentrate fully on crocheting?

"Crochet pattern design is my full-time job and an absolute dream come true."


When you’re experiencing a creative block, how do you get back into the spirit?

"All those years, while I was longing to be a crochet designer, I sketched out my ideas in notebooks, and on napkins and other loose pieces of paper. When I need inspiration, I sift through that now massive pile. I also find social media very inspiring. There are wonderful communities of crocheters out there sharing their projects, ideas, challenges, and words of encouragement."

"My latest project was revamping a popular design from 2019, the Gorgeous Gathered Wrap. This wrap pattern is my second bestseller after the Perfect Pockets Shawl. It has received a lot of attention because of the unique way in which it gathers. I reworked the wrap in a lighter color so people can get a better look at the pretty stitch pattern, but more importantly, I made new photos and a video detailing the four different ways it can be worn -- the fourth way being recently discovered! It is a super versatile piece. I am very excited to share it with everyone!" 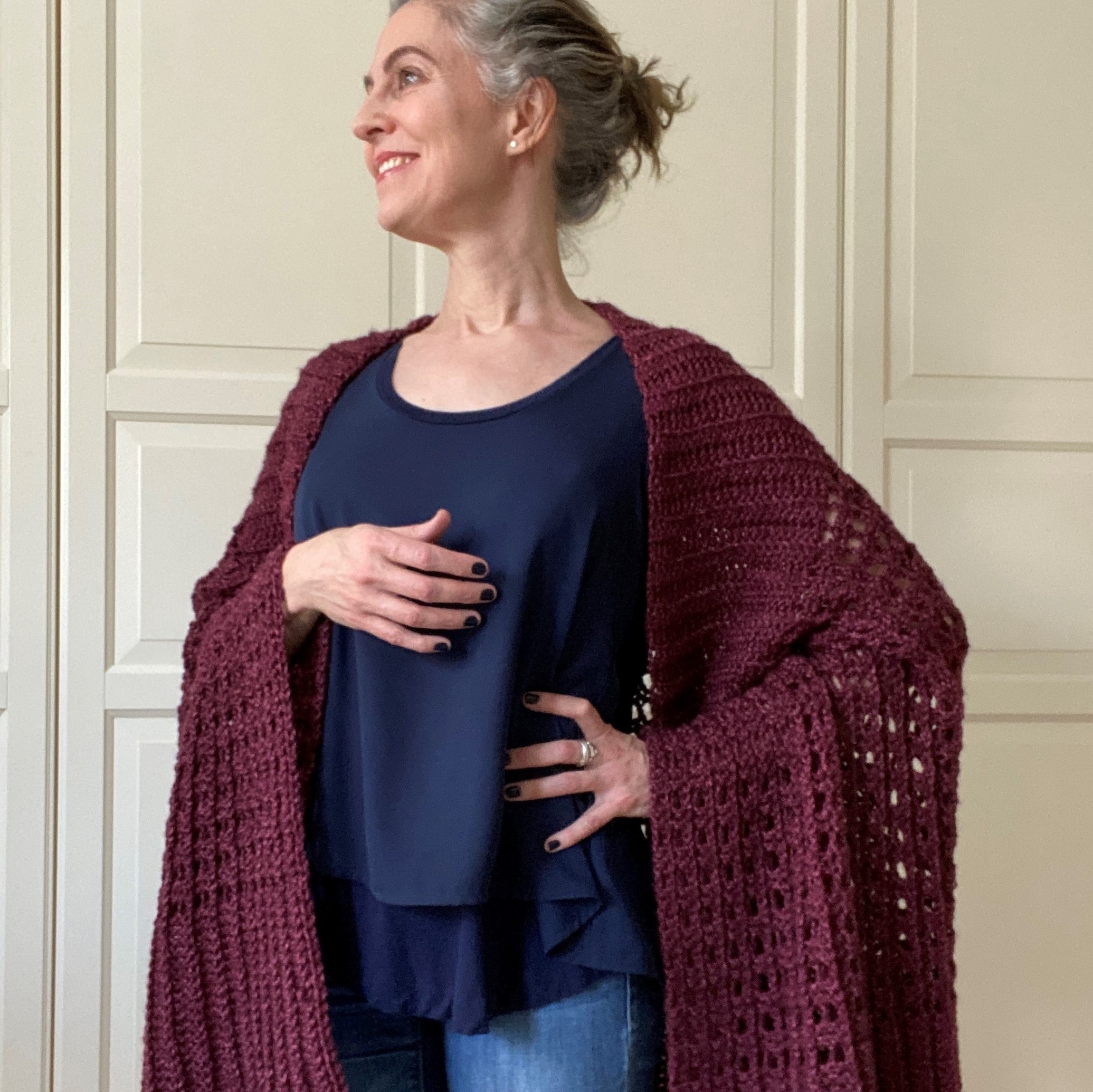 Can you tell us three things about yourself that nobody may know?

"I live in Toronto, Canada, but am originally from the Boston area in the United States. I love crochet designing and the promotion and marketing that is involved in running my own business. I also like discussing current events and technologies, thrift shopping, Instagram, exploring and sharing new music with my 10-year-old son, walking (I am part of a group), travel, and spending time with the people I care about most. I also really enjoy dancing in my kitchen when no one is watching; usually while I’m making dinner."


Check Out patterns by Knot Yourself Out